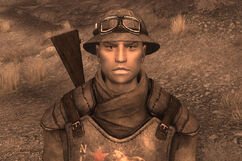 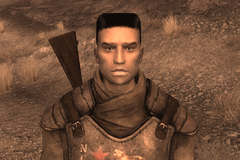 Cooper without his hat

“Our main target is the Legion leader at Nelson. Intel has the commander as one Dead Sea. I've uploaded his last known location to your Pip-Boy.”

Sergeant Cooper is a New California Republic soldier living in the Mojave Wasteland in 2281.

Sergeant Cooper is a squad leader based at Camp Forlorn Hope. His squad, with help from the Courier, assaults the Legion camp at Nelson during the side quest Restoring Hope.

Retrieved from "https://fallout.fandom.com/wiki/Cooper_(Fallout:_New_Vegas)?oldid=3237440"
Community content is available under CC-BY-SA unless otherwise noted.