Cooking stations, found throughout Appalachia, are workstations that have variants of a cooking pot suspended over a campfire, a low cooking pot over a grate, a modified pre-War stove, and a rotisserie spit. They facilitate the cooking of various food, drink, and aid items from ingredients found in the waste or grown in settlements. 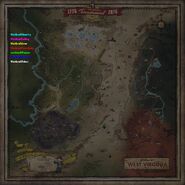