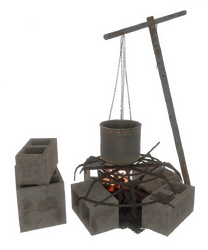 Cooking stations are a constructible settlement object and crafting station in Fallout 4. They are found throughout the Commonwealth and are used to cook food from a variety of ingredients.

Cooking stations are workstations consisting of a cooking pot suspended over a campfire by cinder blocks, a modified pre-War stove, and a rotisserie spit. They facilitate the cooking of various food, drink, and aid items from ingredients found in the waste or grown in settlements. Unlike campfires in Fallout: New Vegas, cooking stations in Fallout 4 remove radiation from crafted foods and beverages.

All XP amounts are shown for a player character with 1 Intelligence.

¹This crafting recipe will only appear after completing Mitch's quest, The Hold Out.

²This crafting recipe will only appear after completing The Devil's Due.

Although cooking stations can be built in any player character owned settlement once the second rank of Local Leader has been obtained, the following locations come with a pre-installed cooking station:

Loading screen
Add a photo to this gallery
Retrieved from "https://fallout.fandom.com/wiki/Cooking_station_(Fallout_4)?oldid=3434098"
Community content is available under CC-BY-SA unless otherwise noted.