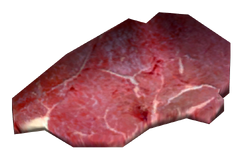 A potent stew made by the Fiend leader Cook-Cook. It restores health constantly for a minute and increases the player character's Strength for the duration of its effects.

This item must be crafted by the Courier. It is not sold by merchants or found elsewhere in the wasteland. The recipe for the stew can be found outside the west entrance to the South Vegas ruins, in a Fiend encampment defended by Cook-Cook and his gang. It will be sitting on a shelf along with all the required ingredients for the dish, with the exception of the two beers.

Retrieved from "https://fallout.fandom.com/wiki/Cook-Cook%27s_Fiend_stew?oldid=3423971"
Community content is available under CC-BY-SA unless otherwise noted.