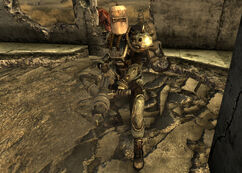 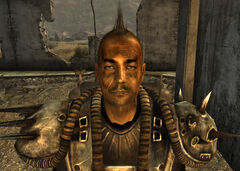 “NCR? Bunch of soft little bitches, they've got no stomach for life in the wasteland. Got some choice strange, though, I'll give 'em that. Heh heh... yeah. I'll give 'em *that* all right.

Cook-Cook is a psychotic rapist, pyromaniac, chef, and leader of the Fiends living in the South Vegas ruins in 2281.

Cook-Cook is an infamous flamer-wielding psychopath who has a very close connection to his pet brahmin, Queenie.[1] He is located just north of the Poseidon gas station, within some ruined buildings. A leader of the Fiends, Cook-Cook is also known for raping captives, including NCR 1st Recon Sniper Corporal Betsy, who still bears the psychological trauma of his attacks,[2] and Pretty Sarah, who was raped, tortured and burned.[3] Cook-Cook gained his nickname not only because he regularly uses fire-based weapons, but because he is also an allegedly exceptional if a bit unhygienic, cook.[4][5] Cook-Cook also dabbles in the slave trade, which is notably exuded by Saint James.[6] Once, after buying a woman, two teenage girls, and a teenage boy, he forced the women to watch as he set the boy aflame.[7]

Retrieved from "https://fallout.fandom.com/wiki/Cook-Cook?oldid=3242396"
Community content is available under CC-BY-SA unless otherwise noted.