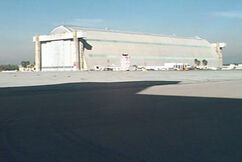 Convince Rusty Hook Guards to Allow Passage was going to be a quest in Van Buren, the canceled Fallout 3 by Black Isle Studios, but was cut. It was located in the Bloomfield Space Center.[1]

After getting through the parking structure, these guards will approach the player and initiate dialogue. If the player has not yet freed Jillian from the Reservation and completed the prisoner retrieval quests, the guards will basically say to get the hell out of here. If the player is a good Charisma Boy, then he should be able to get some information out of the guards pertaining to what the Rusty Hooks are and that they are always interested in some trading as long as the trader does not care where the loot came from. If this is acceptable to the player, they will let him pass and tell him to meet Bear in the main walkway between the workshop (Rocket Assembly Building) and the homestead (Operations and Communications building). They will also insist that the player keep his weapon holstered.

Retrieved from "https://fallout.fandom.com/wiki/Convince_Rusty_Hook_Guards_to_Allow_Passage?oldid=3345962"
Community content is available under CC-BY-SA unless otherwise noted.