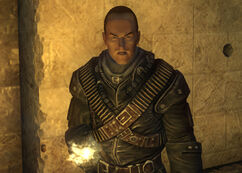 The convicts are escaped prisoners who have overrun and occupied the town of Primm in 2281.

The convicts are prisoners who have escaped from the NCR Correctional Facility. Instead of remaining with the Powder Gangers, they decided to travel south and raid the town of Primm.

In Primm, the convicts have established their base of operations in the Bison Steve Hotel, where they are holding the town's deputy hostage. Their leader is also found in the same building.

My Kind of Town: The Courier needs to kill or sneak around the convicts to free Deputy Beagle.

If the Courier has completed My Kind of Town quest, the convicts inside Bison Steve Hotel will be dead.

Retrieved from "https://fallout.fandom.com/wiki/Convict?oldid=3270335"
Community content is available under CC-BY-SA unless otherwise noted.