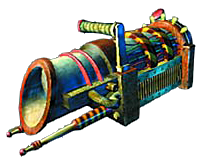 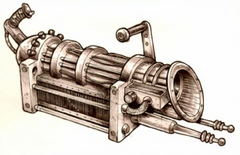 The continuous fire laser is an energy weapon in Fallout: Brotherhood of Steel.

The continuous fire laser is a post-War prototype of an electric beam Gatling laser created by Vault-Tec in the Secret Vault, using lasers to create a conductive plasma conduit in the air and then discharge an electrical differential across the conduit, delivering a bolt of lightning that will burn (by electrical burn) any target with radius contact.

It's a very good weapon until the very end of Chapter 3, where it will be surpassed by the turbo plasma rifle. Its firing rate is the highest in the game and its consumption of ammunition is astronomical, but its devastating power help greatly if the player character has enough ammunition.

This version did not make it into the game
Add an image to this gallery
Retrieved from "https://fallout.fandom.com/wiki/Continuous_fire_laser?oldid=3242252"
Community content is available under CC-BY-SA unless otherwise noted.