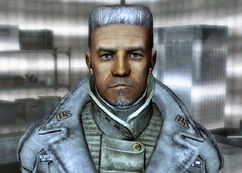 Commander of U.S.forces in Anchorage
Founder and owner of Chase R&D

“Soldier, you're fixing to have a size 10 combat boot shoved up your candy ass.”

General Constantine Chase was a pre-War U.S. Army general, most notable for being the commanding officer of the Anchorage Reclamation, a military operation that repelled Chinese forces from Alaska in January of 2077. The Lone Wanderer encounters and receives orders from a computer-generated reconstruction of Chase during their run through the Anchorage Reclamation simulation in the year 2277.

Constantine Chase is a gruff and determined general officer. His considerable military talents (culminating in the success of the Anchorage Reclamation), coupled with his slightly over-the-top personality and staunch anti-communist views, allowed him to rise to the forefront of military politics before the Great War.[1] As a key figure of the United States military, he championed the Liberty Prime project, proposing it as a solution to the Chinese problem in Anchorage. The project was implemented, despite reports from RobCo and General Atomics researchers that such a combat robot was simply not feasible. Ultimately, the project was unsuccessful, as Anchorage was liberated through the sweat and blood of U.S. servicemen in 2077.

After the conclusion of the campaign, it seems he became increasingly arrogant and self-absorbed, to the point of personally assuming control over the Virtual Strategic Solutions project responsible for creating the Anchorage simulation, making alterations and demands that resulted in the simulation eventually becoming completely detached from what actually happened in Anchorage. Chase was also responsible for green lighting the unofficial implementation of a military Chinese invasion training protocol in Vault 112's Tranquility Lane simulation, at the request of Stanislaus Braun (officially, the request was denied).[2]

Chase was a competent military officer, as evident by his successful completion of the Alaska campaign, but his personality was highly controversial and his sanity doubtful.[3]

There were scandalous allegations concerning Chase, however: The approval of the development of the Psycho combat drug during the war, by Chase's own pharmaceutical R&D company,[4][5] no less, led to a scandal. Soldiers under Chase's command were issued Psycho drugs during the Anchorage campaign to counter their wounds or mental trauma. The drugging of soldiers was considered inexcusable by the public.[6]

General Constantine Chase appears only in the Anchorage Reclamation simulation in Fallout 3 and the Operation: Anchorage add-on and is mentioned in Mothership Zeta, Fallout 4, and Fallout 76.

Retrieved from "https://fallout.fandom.com/wiki/Constantine_Chase?oldid=3406157"
Community content is available under CC-BY-SA unless otherwise noted.