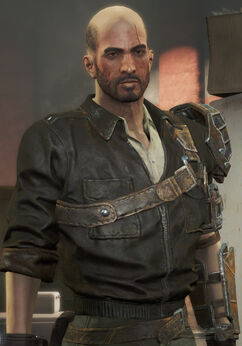 “Haven't you been paying attention? You don't find the Institute. The Institute finds you.”

Conrad "Connie" Kellogg is a Magnum-toting, ruthless, and highly skilled mercenary who serves as the Institute's primary operative within the Commonwealth. He appears as the secondary antagonist in Fallout 4.

Born in 2179, Kellogg hails from the New California Republic on the West Coast. As a child, he lived in an impoverished household with his abusive father, a former raider, and his cynical, but loving mother. Being an alcoholic and abusive parent, Kellogg's father was unreliable as a provider for the family. Instead, Conrad's mother turned to her son for support, while also teaching him that relying on others was foolishness, and that the only things in the world he could depend on was himself and his own gun.

As an adult, Kellogg moved to San Francisco, where he married Sarah and had a daughter, Mary. Though Kellogg worked for the Shi, his family was murdered by unspecified assailants - whom he later killed in retaliation.

After the death of his family, Kellogg spent his life traveling eastward, working as a mercenary willing to do any job no matter how dirty. Some time later, he reached the East Coast and the Commonwealth, where he was eventually hired by the Institute to act as their primary surface operative, due to his extensive experience working in the Wasteland, something which the Institute's members lacked.

Kellogg was eventually tasked with leading a team of Institute scientists in invading Vault 111. The Institute required radiation-free test subjects, and the vault's cryogenically-preserved residents were the perfect candidates. Kellogg chose Shaun, and killed Nate/Nora when s/he resisted. Kellogg then taunted the surviving parent, remarking that at least the "backup" will be unharmed before leaving the vault; Shaun's DNA was used by the Institute to complete the Generation 3 synths.

At some point, Kellogg was cybernetically enhanced by the Institute, which halted his aging and extended his lifespan. By 2287, he is over 108 years old, but physically appears to be less than half of that. Some time after kidnapping Shaun, Kellogg lived for a while in Diamond City with a synth with the appearance of a ten year old Shaun (according to Ellie Perkins). He eventually abandoned the house after X6-88 came to collect synthetic Shaun on behalf of the Institute. He was then tasked with tracking down the rogue Institute scientist Dr. Brian Virgil, who had recently fled from the Institute. In preparation for tracking down Dr. Virgil, Kellogg set up a base of operations in Fort Hagen, though he became injured in several battles on his way from Diamond City.

With help of Dogmeat, the Sole Survivor is able to track Kellogg to his base of operations. They fight through Fort Hagen's synth detail, as Kellogg taunted them, offering the Survivor a chance to turn back. As the player character approaches, Kellogg takes note of their determination and allows them a chance to talk to him, by ordering his synths to stand down. Kellogg informs the Sole Survivor that Shaun was no longer with him, but with the Institute. This leads to a fight which results in Kellogg's demise.

The Sole Survivor will have to slay Kellogg and take his chip away to Memory Den, where they will use Nick Valentine to see Kellogg's past and find the only way to enter the Institute.

Kellogg appears only in Fallout 4.

His meeting with the Institute

Kellogg as a child

Kellogg's icon for Shattered
Add an image to this gallery
Retrieved from "https://fallout.fandom.com/wiki/Conrad_Kellogg?oldid=2830219"
Community content is available under CC-BY-SA unless otherwise noted.