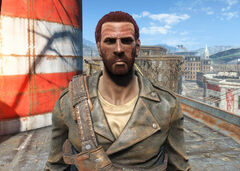 The note can be found on Connor on a rooftop at Camp Kendall during The Paper Mirror.

Connor ripped the pages from the book one night when Zane was sleeping.

He knew the boss hadn't gotten to that part yet, or else Connor would be dead.

The truth was, he'd been thinking of killing Zane for weeks now. He was talking nonsense about retiring, going to Far Harbor with some girl he met at a bar.

Connor knew Zane was full of shit, but he also knew he was getting soft. That's why he built a little hideout near Greentech Genetics, in the tall building by the river.

When the time was right, he'd set up base there and start his own crew, with Zane's money and his gun.

And what a gun it was. It was called an Anti-Materiel Rifle, and it ate through Power Armor like a hot knife through butter.

Zane had no use for it. The only reason he had it was because of that book. So it was only right for Connor to use the same book to relieve him of the burden.