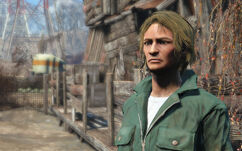 Connie Abernathy is a merchant located at Abernathy farm in 2287.

Connie is a tough, yet mostly friendly merchant who is married to Blake. She is often seen farming, but occasionally can be seen walking around. She will buy chems for higher prices than any other merchant. She is the mother to Lucy Abernathy, and to the recently-deceased Mary Abernathy.

Connie Abernathy appears only in Fallout 4.

Retrieved from "https://fallout.fandom.com/wiki/Connie_Abernathy?oldid=3176799"
Community content is available under CC-BY-SA unless otherwise noted.