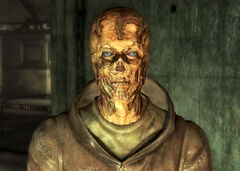 Connelly is a ghoul found dead inside of the Old Olney underground in 2277.

Connelly was always arguing with Sanders. They should "head west," he told anyone who would listen, and meet up with the ghoul resistance over at Warrington station. But Sanders wanted to roam the Northern Wastes. Grudgingly, Connelly accepted this plan, but he knew the area was rife with danger. Upon a discovery of an empty underground camp below the streets of Old Olney, Connelly began erecting makeshift barricades, just in case of a curious mole rat or two. His last memories were being simultaneously torn apart by a deathclaw, and gurgling "I told you so!" to Sanders.[1]

Connelly appears only in the Fallout 3 add-on Broken Steel.