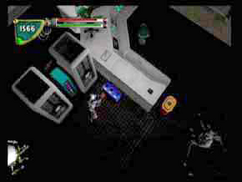 Connect Circuits is a quest in Fallout: Brotherhood of Steel. It is located in the Secret Vault - facilities 2.

Go to Facilities Two. You'll need to reconnect two circuit breakers manually. The technician will open the door for you, Go to the west then take a small hallway north then head NE. There will be four gun turrets. Run to the east until you reach another door. The lights will cut out momentarily but the technician will fix those for you. When they come back on, a few robots will be in the room.

The road will split up ahead. Take the path to the east first. Run past some robots to hit the switch and stop their production. Then head back to the west, killing all the robots that were produced. Open the door and use the panel to repair the first breaker. Head back to the cannon room.

Continue west until you come to a door. Open it, then try and open the northern door. It's locked but that doesn't stop the technician. He'll open it for you so proceed through. Move through the next door, then head north. After walking a for a little way, head east. You're going to want to make it through the giant bolts of electricity pouncing through the air. Just move when it's clear in front of you. Finally you should make it to the breaker. Fix it so you can head back to Facilities One. On the way back you'll hear the technician screaming; he'll be dead upon return. The door to the Facilities Three will now be open.

Retrieved from "https://fallout.fandom.com/wiki/Connect_Circuits?oldid=2990802"
Community content is available under CC-BY-SA unless otherwise noted.