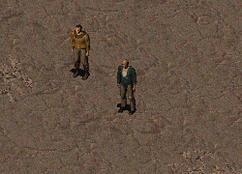 The Village, outside Vault City

Resolve the problem with the nearby village

“We have nothing to fear from Vault City any longer, and will be able to live here in peace. Thank you again, wanderer.”— Connar to the Chosen One after helping him

Connar is an inhabitant of the Village outside Vault City in 2241.

Connar is a dirty but strong-looking man.[1] He was meant to be the self-appointed leader of the village just outside of Vault City. His role was to be to convince the Chosen One to not kill the mole rats there, so that the villagers would not become Vault City's servants.

Connar was to appear in Fallout 2, but was eventually cut.

Retrieved from "https://fallout.fandom.com/wiki/Connar?oldid=3341237"
Community content is available under CC-BY-SA unless otherwise noted.