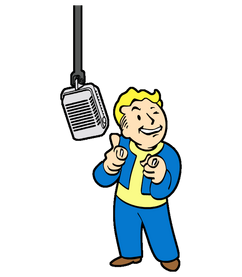 Confidence Man is a side quest in Fallout 4, where the Sole Survivor helps the Diamond City Radio host Travis Miles gain confidence.

There are two ways to start this quest. Either speak with Travis Miles at the radio station in Diamond City and then subsequently overhear a conversation about Vadim Bobrov looking for someone to help him regarding Travis, or overhear Vadim telling a story to Hawthorne while in the Dugout Inn, then re-enter the bar and speak to Vadim. Both these events will trigger the quest to start.

Speak to Vadim at the Dugout Inn. He will ask the Sole Survivor what they think of Diamond City radio host, Travis. Regardless of the chosen response, the conversation ends with Vadim stating that Travis could use some confidence to improve his radio show, then asking the Sole Survivor to help. If they agree, Vadim can be pushed to offer caps through three speech checks of increasing difficulty and amount. Whether or not he is successfully persuaded, Vadim reveals that he is going to stage a bar fight that night and requests that they return after 6 P.M. to assist Travis in the fight.

Returning to the bar after 6 P.M. will result in happening upon a scene in which Travis is confronted by Gouger and Bull, two raiders Vadim hired for his staged fight. They begin to verbally harass Travis, who meekly replies, thus initiating the plan. At this point, the Sole Survivor can use Charisma to convince Travis to fight. One must help Travis fend off the two assailants using melee attacks to beat them into submission (using ranged weapons will turn all of the occupants hostile and Diamond City security will arrive). After the fight, speak with Travis, who is thrilled by what took place. Once he starts to leave, speak with Vadim. If any speech checks were passed, Vadim will pay the Sole Survivor the agreed amount of caps (if any) and he thanks them.

The second part of his plan is to hook Travis up with the bar's waitress Scarlett to further assist in Travis' confidence. One can find and convince her to meet and talk with Travis. This can be done by either convincing her that Travis does indeed like her or by paying her to hook up with him. Once she agrees, return to the Dugout Inn.

Upon returning, Yefim Bobrov will inform the player character that Vadim has been kidnapped by Gouger and Bull for not giving in to their demands of owed bottle caps for the services provided. He pleads for help but doesn't know where they took Vadim, saying he needs to stay and that Travis should be spoken to. Heading to the radio headquarters and explaining the situation to Travis results in him sharing that Vadim is probably at Beantown Brewery and requests to go with the Sole Survivor to assist in his rescue.

The Sole Survivor can then travel to the brewery, speak with Travis outside briefly, and head in. The building is held down by a raider gang that needs to be eliminated in order to get to the room in which Vadim is being held and guarded by Tower Tom, the gang leader (unless he was defeated on a prior visit to the brewery) who will also be assisted by Bull and Gouger. Once he and all surrounding members are dead, Travis and the Sole Survivor can enter to untie and free Vadim. Speaking with Vadim and then Travis will reveal the radio host now has a new outlook on life with all that's happened to him. With this change, he thanks the Sole Survivor, returning to his radio station with his newfound confidence.

Retrieved from "https://fallout.fandom.com/wiki/Confidence_Man?oldid=3429843"
Community content is available under CC-BY-SA unless otherwise noted.
... more about "Confidence Man"
RDF feed
Has platform
PC +, Playstation 4 +  and Xbox One +