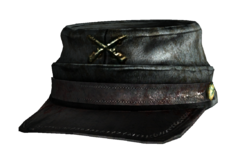 The Confederate hat is a civil war kepi with a pair of crossed rifles on its front, which is added to Fallout 3 with the Point Lookout add-on.

The Confederate hat grants +1 to Perception, but has a low DR and item health. It can be repaired with other Confederate hats as well as pre-War baseball caps.

The Confederate hat has very low item health, meaning it requires repairs after nearly every fight.

The Confederate army issue kepi was popular during the American Civil War on both sides. Point Lookout was a Union prisoner-of-war camp for Confederate soldiers. Judging by its design, it appears to be a Confederate officer's hat; higher-ranking soldiers wore Stetson hats.

Retrieved from "https://fallout.fandom.com/wiki/Confederate_hat?oldid=3048959"
Community content is available under CC-BY-SA unless otherwise noted.