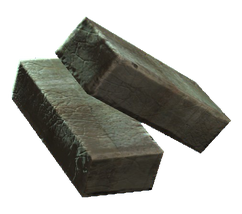 Concrete is a crafting component in Fallout 4.

A tough and heavy rock-like material made from pulverized stone. Concrete is used in building several items in settlements, most notably foundations for houses and water pumps, as well as statues and other decorations. The Wasteland Workshop add-on introduces a large number of additional items which require a fair amount of concrete to construct.

Concrete can also be acquired by purchasing shipments from the following vendors.

Retrieved from "https://fallout.fandom.com/wiki/Concrete_(Fallout_4)?oldid=3451867"
Community content is available under CC-BY-SA unless otherwise noted.