Out of Time
When Freedom Calls

Fallout 4
“What about the city? Concord is nearby, and, well, the people there have only shot at me a few times...”— Codsworth

Concord is a location in the Commonwealth in 2287.

Concord was founded in 1635; signs noting the year can be seen entering the town from the west and south.[1] On April 17, 1775, British soldiers in the area were involved in the initiative to "quell the growing tide of revolution" under the command of General Thomas Gage.[2] Gage had received orders from the Earl of Dartmouth four days prior to see all artillery, ammunition, provisions, and weaponry held by the colonists of Concord destroyed.[3]

The general ordered Lieutenant Colonel Smith to take 21 companies of their best soldiers in haste and secrecy to Concord in order to disarm the militia.[3] Gage instructed Smith to destroy the weaponry, but to avoid harming the colonists, stealing from them, or destroying their property.[3] Before midnight, Smith set out with 700 soldiers from Boston Common to carry out his orders.[4][5]

In response, Paul Revere instructed Robert Newman to climb to the top of the Old North Church, lighting two lanterns to alert the colonists that the British forces were approaching via the Charles River.[6] While Newman broadcasted the warning, Revere started towards Lexington and Concord on his famous "midnight ride" to warn fellow patriots that the British had mobilized.[7] The two forces met near the Old North Bridge, starting the Battles of Lexington and Concord and ultimately sparking the Revolutionary War.[8] A monument is located near the bridge to commemorate the event.[8]

The town's centerpiece, the Concord Parks and Recreation Department's Museum of Freedom, showcased these historical events and welcomed tourists, while the rest of the city displayed remnants of flags and signs reading, "Celebrate History!" In 2287, the city has become a raider stronghold, and upon the Sole Survivor's emergence from nearby Vault 111, finds Preston Garvey and his group trapped after their escape from the Quincy Massacre.[9]

Several of the houses and stores of Concord are boarded up. The Museum of Freedom and the church are located in the southeast part of town. The workhouse is situated near the main road to the north, and the Concord Speakeasy is in the center. These buildings are down the street from the museum, near the Concord civic access underground and Concord Savings and Loan. Across the street is Wright's Inn. There is also an accessible hardware store by the museum, near a Walden Drugs and Fallon's Department Store. Three municipal plutonium wells are affixed to buildings throughout the town.

Concord appears only in Fallout 4.

View down the main drag

Road to the museum

Vertibird on the museum roof

City water tower to the north 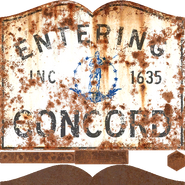