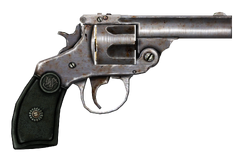 The concealed .32 pistol is a quest item in the Fallout 3 add-on The Pitt.

The Smith & Wesson .32 pistol was manufactured throughout the late nineteenth century and into the early part of the twentieth. As the name implies, it uses .32 caliber rounds for ammunition. It is commonly found to be in use by raiders and wastelanders. Although it is a light weapon, it pales against the 10mm pistol in terms of rate of fire and damage. It can, however, be fired quite fast if the player can get a rhythm down.

Upon arrival at the bridge during Into The Pitt, Wernher offers the Lone Wanderer the option between a knife and a pistol. If the Lone Wanderer picks the pistol, the concealed .32 pistol is automatically added to the inventory in the Misc tab. The pistol however cannot be used at this point. After the confiscation of your equipment, a .32 pistol in poor condition will show up in the weapon section.

The weapon is depicted as a fresh potato in the GECK editor.

Retrieved from "https://fallout.fandom.com/wiki/Concealed_.32_pistol?oldid=3235547"
Community content is available under CC-BY-SA unless otherwise noted.