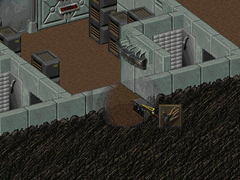 “A circuit board with several unidentifiable parts, a microphone, and an inscription that reads "Vault-Tec Voice Recognition Module."”— In-game description

The computer voice module, also known as the Vault-Tec voice recognition module, is a quest item in Fallout 2.

This is a snap-in module that fits in the computer in Vault 13.

It can be bought from Eldridge in Reno for $3000 ($2500 or $1500 if one haggles enough) or one can be found on the second floor in Vault 8 (Vault City). To get to the computer voice module on the second level of the vault, the middle right door on the bottom side must be lockpicked. By fixing the computer, Gruthar and the talking deathclaws give the Chosen One their GECK.

Retrieved from "https://fallout.fandom.com/wiki/Computer_voice_module?oldid=3186236"
Community content is available under CC-BY-SA unless otherwise noted.