A computer is a machine which manipulates data according to a set of instructions. In the Fallout universe, computers range from simple terminals to Automated Personalities (AP) to Artificial Intelligence (AI).

One of the major effects of the timeline divergence is that instead of working to develop supercomputers and miniaturized electronics (in the process creating the first semiconductor, the transistor, in 1947), post-World War II humanity in the Fallout universe invested its technological efforts in further harnessing the atom and robotics. While microchips do exist, they are not uncommon, usually seen among common household items, super computers, and energy weapons alike.[1][2][3]

As a result, while computers were developed in the 20th century,[4][5] they are far clunkier than the ones in our world and still use monochromatic, command-line interface UI. The personal computer was developed, but due to these limitations on compactness, most models can only be used to store text files; almost all extremely advanced computers exist as large mainframes that can take up whole rooms. The users access them via terminals. Nonetheless, some mainframes are highly advanced in terms of processing power, such as those capable of running an artificial intelligence.[6]

While the typical 80s and 90s desktop computers are seen as map props in Fallout and Fallout 2,[2] it should be noted that some computers are very advanced. For example; Vault City's central computer is capable of "communication" with voice commands and can reformat/update Pip-Boys via a slot designed for them. It also has the ability to produce cartoon animations (with sound) for its various computation events.[7] Also some computers had security devices.[8] Email and touchscreens were invented, as is the case with the Emperor v8.8[9]

An Automated Personality refers to a computer or a robot created with specific skills and having an automated personality able to speak but only on a preprogrammed set of responses keyed to certain inputs atop a standard operating system. This is achieved using interchangeable computer chips or holotapes that hold different software and can be wired to the AP hardware.[10] They are unable to make logical deductions and further have no reasoning capabilities. Compared to complex AI computers they are far less advanced. AP was created in The Sink in the Big MT and feature prominently in the Fallout: New Vegas add-on Old World Blues but have appeared in nearly all Fallout games.

In colloquial parlance, Artificial Intelligence refers to a computer or a robot that is "self-aware" – it is capable of not only logical deduction, reasoning and speaking, but knows of its own existence,[11] the possibility of its own mortality (and immortality), and possesses creativity, desire, and, in many cases, emotion.[12] AIs were first created in the United States in 2059.[13] However, due to restraints on memory accessibility, few advances were made in the following years, but these AIs laid the foundation for future research across the country.[13] It would eventually become so commonplace that not only would it be sold on store shelves, it would become common practice for individuals to personalize their product.

The most advanced AI to date, are the synths, specifically the Generation 3 synths. Almost entirely biological and near-perfect clones of humans with the exception of a number of mechanical components inserted during manufacturing, Generation 3 synths are entirely sapient and self aware, with few exceptions.

Mister Handy models, as well as their various derivatives, appear to display some form of self-awareness despite initially being designed as artificial personalities. Examples include Codsworth, Miss Edna and Curie. Both Codsworth and Curie express desire and creativity and even possess their own moral values. Miss Edna even displays romantic attraction.

List of computers in the Fallout games[edit | edit source]

Found only in Old World Blues: 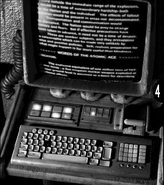 Large mainframe
Add a photo to this gallery

Retrieved from "https://fallout.fandom.com/wiki/Computer?oldid=3415927"
Community content is available under CC-BY-SA unless otherwise noted.