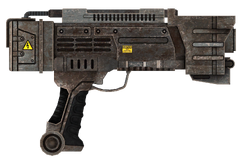 The Compliance Regulator is a unique weapon in the Fallout: New Vegas add-on Honest Hearts.

The Compliance Regulator is an electroshock weapon and a unique version of the standard laser pistol, in that not only does it fire a blue beam instead of the normal red, but dealing a Critical Hit upon an enemy will paralyze them for 10 seconds. It also does not have a handguard like other laser pistols.

The Compliance Regulator can fire a total of about 995 times using standard cells, the equivalent of 34 reloads, from full condition before breaking. 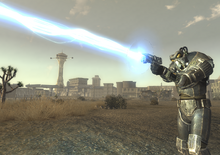 Add a photo to this gallery
Retrieved from "https://fallout.fandom.com/wiki/Compliance_Regulator?oldid=3430709"
Community content is available under CC-BY-SA unless otherwise noted.
... more about "Compliance Regulator"
RDF feed
Has platform
PC +, Playstation 3 +  and Xbox 360 +