Communists are enemies found in Appalachia.

Originally People's Liberation Army infiltrators sent to investigate the Appalachia region, similar to the operation based in the Morgantown Mama Dolce's Food Processing nearby, the Communist soldiers survived the Great War thanks to the extensive cave system that made up the Deep. They did not survive unscathed however, and in the years since the War they have undergone ghoulification. Unlike the Morgantown operation, the infiltrators based in the Deep escaped the notice of Enclave forces in the Whitespring bunker, but similarly to the Morgantown infiltrators have become trapped, thousands of miles away from home in enemy territory.

Their mission was the acquisition and operation of a Motherlode drill,[1] presumably to tunnel into the Whitespring bunker in an attempt to capture it and its secrets for the People's Republic of China. However, the Great War brought a halt to their mission. As of 2103, they are still trying, though they have been unsuccessful in actually breaking through.[2]

Communist soldiers appear in Fallout 76, introduced in the Wastelanders update. 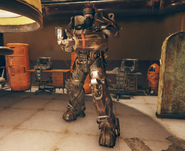 Emblem worn by the communists

Unlike most enemies, communist soldiers found in the Deep do not have any passive armor values from any type damage. They may only gain armor from their outfits, which provide 0. The communists in power armor will receive their values from the power armor set.[verified]