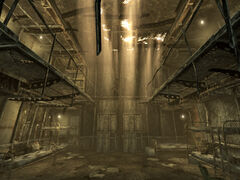 “[grumbles]... should've stayed in Rivet City... traveled through the wasteland for this place...”— Megaton settler

The common house is a three-story building in Megaton that serves as temporary housing for transients and other non-citizens.

On the first floor, three single beds and two bunk beds are placed along the east and west walls, with two lockers set up against the far wall. A footlocker and several tables and chairs are placed around the room. During all hours of the day, various Megaton settlers can be found on this floor eating meals, chatting about local gossip, and sleeping in the beds. To the right of the entrance, a set of stairs leads to the second floor. At the foot of the stairs stands a shelf with a box of Sugar Bombs on its lowest rack.

The second floor features a rectangular atrium in the center of the room with railed gangways running along either side. Dining tables, a park bench, and a shelf populate the gangways, which look down upon the first floor. After arriving at the top of the stairs, the Lone Wanderer will find a refrigerator directly in front of them and the stairs to the third floor directly behind. Settlers can occasionally be found milling about on the second floor, eating meals, or sitting silently along the gangways. To the side of the stairs is a door that opens upon a small single bedroom with a chair, footlocker, and shelf. Often a settler can be found sleeping or sitting in this room eating a meal.

On the uppermost floor, the player character is met by a small pile of overturned tables, chairs, and empty bed frames. A couch runs along the north wall and a table and two chairs are set up against the back wall of the room. Settlers rarely if ever visit the third floor of the common house.

This common house appears only in Fallout 3.