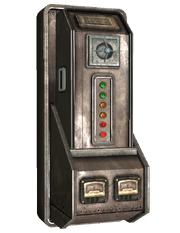 Commissary terminals are pre-War stations developed as automated supply stores that could be accessed by soldiers on military bases. Each terminal recognized the individual accessing it and was linked to a common inventory, preventing troops from going to different terminals to try to gain multiple copies of desirable items. Items could also be submitted for automated repair.

The terminals were accessed using special military pay chits that were designed to prevent counterfeiting. This was unsuccessful as it was subsequently discovered that these chits happened to be approximately the same size and shape as standard bottle caps. Because of this, all the Commissary terminals were locked down before the Great War.[2]

The only known location where these terminals were deployed was in nuclear silos and bases near the cities of Ashton and Hopeville, an area that later came to be known as The Divide.

Commissary terminals are small computers found in the Divide, which are used to buy and sell items. Its stock includes rare items such as the weapon mods for the Red Glare, shoulder mounted machine gun, as well as Riot gear and US Army combat armor. They can also be used to repair equipment and will restock supplies every three days.

Commissaries will not stock new ammo types added by the Gun Runners' Arsenal add-on, however they will stock the .45 Auto rounds added by Honest Hearts.