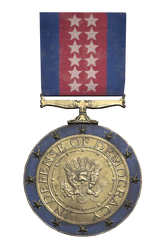 The commendation is an American medal that is a miscellaneous item in Fallout 76.

The commendation is an American medal that was presumably awarded for operations related to the Liberation of Anchorage or a medal that serves as an indication of service.

Awarded for either completing an Enclave event or completing the Enclave quest Officer on Deck.

The commendation is similar in purpose to the National Defense Service Medal, created in 1953 to honor members of the military who have served in major wars.

Retrieved from "https://fallout.fandom.com/wiki/Commendation?oldid=3252348"
Community content is available under CC-BY-SA unless otherwise noted.