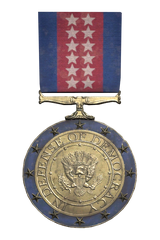 The commendation is an American medal that is a miscellaneous item in Fallout 76.

The commendation is an American medal that was presumably awarded for operations related to the Liberation of Anchorage or a medal that serves as an indication of service like the National Defense Service Medal in our real-timeline. It is awarded to the player after either completing an Enclave Event or the Enclave quest Officer on Deck. It is safe to assume that the Medal has since been carried on by the Enclave to serve a similar position as it did pre-War.

Quest Only Item - Awarded for either completing an Enclave Event or completing the Enclave Quest Officer on Deck - No other spawns.

Retrieved from "https://fallout.fandom.com/wiki/Commendation?oldid=3016330"
Community content is available under CC-BY-SA unless otherwise noted.