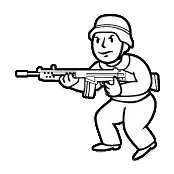 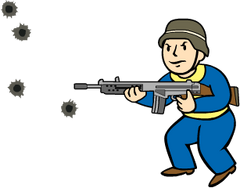 “While using a rifle (or similar two-handed weapon), your accuracy in V.A.T.S. is significantly increased.”— In-game description, Fallout 3 and Fallout: New Vegas

Commando is a perk in Fallout 3, Fallout: New Vegas, Fallout 4 and Fallout 76.

In Fallout 3 and Fallout: New Vegas, the perk increases your chance to hit in V.A.T.S. by 25%. This bonus is multiplicative, not additive.

Ranks 2 and 3 each add 10% hip-fire accuracy, for +20% total. Rank 4 gives a 4% chance to stagger a target. Rank 5 increases this to a 6% chance. In addition, if Nuka-World is installed, Commando now becomes a crafting perk, mainly for the automatic variant of the handmade rifle.

In general, Commando affects any automatic pistol or automatic rifle, but, despite its wording, does not affect automatic heavy weapons. There are also exceptions: for example, a pistol-gripped plasma thrower is automatic, but is affected by Gunslinger, not Commando.

Commando affects all automatic rifles and their unique variants. For weapons that are pistols in their basic state, a rifle stock/grip must be attached. See Expert Commando, Master Commando, and Gunslinger for more information.

Retrieved from "https://fallout.fandom.com/wiki/Commando?oldid=3428708"
Community content is available under CC-BY-SA unless otherwise noted.