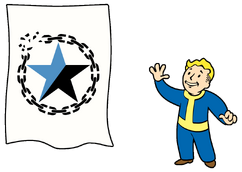 Coming to Fruition is a main quest in Fallout 76.

With the Scorched Detection System back up and running in the Mire and Rose installing the communication uplink, Abbie needs a master holotape she keeps in her desk taken to the Harpers Ferry Armory to fully reboot the Scorched Detection System. However, Harpers Ferry is overrun with Super Mutants, feral ghouls, and possibly even Scorched, so they will need to be dealt with to reach the armory.

At the armory, several automated turrets defend the armory with firing high-explosive rounds at anything they deem hostile, and the armory itself is like a big maze to reach Raleigh's terminal necessary to upload the master holotape into and download the routing schematics from it.

Once that is done, Abbie then requests the master holotape be taken to the Charleston Capital Building to download the access codes from Senator Sam Blackwell's terminal. However, strong feral ghouls have overrun the capitol building, and Blackwell's terminal is locked down by security that needs to be overruled from the terminal in the basement. Once the lockdown is lifted, the access codes can be retrieved, and Abbie then requests that everything be uploaded from a Relay Tower.

Once the holotape is uploaded at a Relay Tower, return to Abbie's bunker to reboot the Scorched Detection System. Once done, Abbie offers some final words before the quest is completed.

Retrieved from "https://fallout.fandom.com/wiki/Coming_to_Fruition?oldid=3431368"
Community content is available under CC-BY-SA unless otherwise noted.