Coming Out of Her Shell 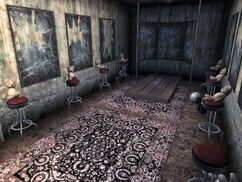 “It's excessive examination of the human form to achieve psychological arousal. Disgusting. I would never succumb to such... base appetites. Distractions. Filthy, filthy distractions.”— Dala, explaining "formography"

Coming Out of Her Shell is a side quest in the Fallout: New Vegas add-on Old World Blues.

Once all the members of the Think Tank have stopped bickering with each other, the player character will have the option to seek each of them out and talk to them. Dr. Dala can normally be found on the left side of the Think Tank, across from Doctor 0.

When talking to Dr. Dala, it becomes clear that she's more than unusually interested in the Courier's biorhythms. To access the quest, the player character needs to pass a Perception check of 8, use the Lady Killer/Cherchez La Femme Speech option, or bring Dr. Dala a teddy bear. Several teddy bears can be found in Dr. Dala's room in the Think Tank (the second door on the left upstairs), as well as her house (House #104) in Higgs Village.

Selecting all three of the biological actions in any order will complete this portion of the quest and will suitably satisfy the doctor. After performing the actions, the player can offer to occasionally return to breathe for her, or threaten to tell the others of her proclivities unless she makes it worth the player's while.

On choosing the first option, Doctor Dala will present the Courier with a gift of energy weapon ammunition, although most times it is 'drained'. She will then tell them to come back later, claiming to be a "little sensitive" right now. Choosing the blackmail option gets the player a conductor, wonderglue, and a bit of pre-War money.

Afterwards, the Courier can return once a day for another "breather", subsequently repeating the three actions will suffice, and no additional dialogue options are required.

The house on the local map

Dr. Dala's teddy bears lined up on the bed.
Add a photo to this gallery
Retrieved from "https://fallout.fandom.com/wiki/Coming_Out_of_Her_Shell?oldid=3415994"
Community content is available under CC-BY-SA unless otherwise noted.