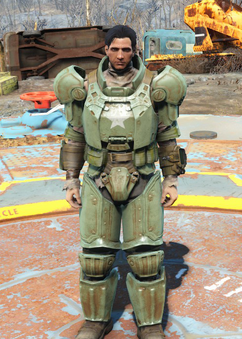 Combat armor was issued within the Armed Forces of the United States of America during the Great War and appears as armor in Fallout 4. Its appearance is radically different from previous games, largely due to the modular nature of the primary armor sets. It provides balanced Damage Resistance and Energy Resistance.

Combat armor is considered "Tier 3" and becomes more common as one enters into the middle levels (15-35). Combat armor offers roughly equal ballistic protection to metal armor and equal energy protection to leather armor. The combination of protection makes it generally a better choice than equivalent-modded of the other armor types, although combat armor becomes available at slightly higher levels than the corresponding tiers of leather and metal armor. Combat armor provides no latent protection from radiation, though through an exclusive mod it can result in the highest radiation resistance available to conventional armor (at the sacrifice of some ballistic and energy protection).

The model for combat armor in Fallout 4 appears to have a basic harness worn underneath, on which a modular system of ballistic plates is attached. Sturdy armor replaces the harness with a more encompassing leather under-liner to the torso plates, along with adding elbow and knee pads, shin guards and forearm guards. While heavy armor adds a large collar, additional plating (now resembling a cuirass-style breastplate), large pauldrons to the shoulder guards and utilizes larger thigh and shin guards.

The combat armor helmet is the corresponding armor piece to the combat armor set. This model displays what is possibly a headlamp, attached to the left side above the brow line. The helmet unfortunately does not utilize the lamp like the mining helmet. It can be modified, similarly to the metal helmet, with the same types of material mods as other pieces of combat armor. It does not currently appear to have a sturdy or heavy variant.

The combat armor helmet only occupies the hat slot, allowing eyewear and masks to be worn.

Because all variants share the same ID, using the console to spawn any of the pieces will result in a random, level-dependent variant of the armor to spawn (either regular, sturdy, or heavy). 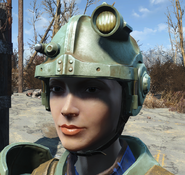 Combat armor helmet
Add an image to this gallery

Retrieved from "https://fallout.fandom.com/wiki/Combat_armor_(Fallout_4)?oldid=2692232"
Community content is available under CC-BY-SA unless otherwise noted.