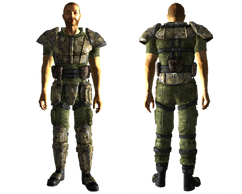 The combat armor and matching combat helmet are pieces of armor in Fallout 3.

A diverse family of personal body armor with varying degrees of sophistication, providing balanced protection against both energy and ballistic damage.[1]

Combat armor is among the best forms of protection in the post-War Capital Wasteland. It has the fifth-highest DR for non-power armors, only lower than Ranger battle armor, Lag-Bolt's combat armor (only available with Broken Steel), metal armor, and Metal Master armor. It is fairly useful for early to mid-level characters, as it can probably be acquired before the Ranger armor, and doesn't have the penalty to Agility that metal armor has.

Unlike the reinforced variants common on the West Coast, all the combat armor available in the Capital Wasteland is short-sleeved, having only the shoulder pads and chest plates covering the torso, as well as the forearm guards. The combat helmet's shaded visor is also absent. The winterized combat armor variant looks the most like combat armor present in earlier Fallout titles, except for the snow-appropriate camouflage pattern and face-covering balaclava.

The helmet is olive drab-colored and its shape resembles the current day PASGT (Personnel Armor System for Ground Troops) Kevlar helmets. The picture shown in the Pip-Boy is also very similar to the German Stahlhelm. Unlike its predecessor from Fallout and Fallout 2, the helmet does not have the acrylic cover over the eyes, so it can be worn with normal eyewear, such as eyeglasses.