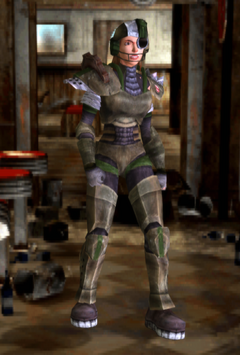 Combat armor is a set of armor in Fallout: Brotherhood of Steel.

Main article: Combat armor
Modeled after the human silhouette, combat armors were designed to provide balanced protection without limiting user mobility. They are a diverse family of personal body armor with varying degrees of sophistication, ranging from the earliest iterations developed by the United States Army[1] to the cutting-edge riot gears that came into use prior to the Great War.[2]

Combat armor is amongst the best forms of protection in the post-War Wasteland. Although extremely expensive and rare, the protection value of this armor is surpassed only by the few incarnations of power armor still salvageable.

Retrieved from "https://fallout.fandom.com/wiki/Combat_armor_(Fallout:_Brotherhood_of_Steel)?oldid=3186752"
Community content is available under CC-BY-SA unless otherwise noted.