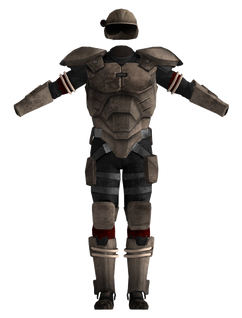 This particular suit is a new version of combat armor that was designed to replace the regular reinforced combat armor. It is a heavier, more protective armor reserved for use by American shock troops and special forces.[3]

This armor provides the same level of protection that is offered by NCR Ranger combat armor but can actually be purchased from vendors. It appears to have much thicker armor plates than regular reinforced combat armor that not only completely cover the torso, shoulders, knees, and lower legs but has forearm guards along with several pouches located along the upper thighs and waist.

The helmet is a ballistic assembly, designed to protect the wearer from projectile and energy weapon impacts, bladed weapons, blunt trauma, and concussion. An integrated polarized visor protects the user's eyes from the ordinary battlefield hazards of grit and dust, but also laser blindness and fragments. It is similar in appearance to the helmet used with the reinforced suit but is a different color. Helmets also incorporate a combination camera/laser rangefinder unit built into the helmet's right side, just above the ear. Those suits of combat armor surviving in the wasteland still have the housing for that equipment, but no suit has been documented as having working hardware. 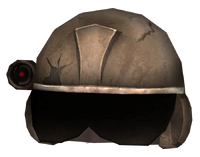 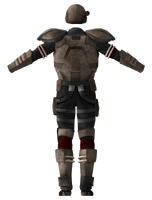 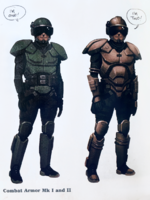