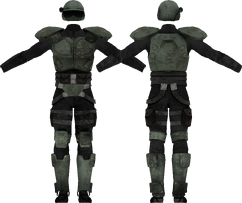 In this more advanced and expensive pre-War model, the torso is covered by the primary armor assembly, including a split breastplate, pauldrons, gorget, and abdominal ring. The sleeves of the bodysuit are full sleeves and include armor plate protection for the upper and lower arms. The lower body is protected by woven pants and incorporates no hard armor, save armored boots. The armor encasing the foot and lower leg is articulated, not sealed. While this permits longer wear times and more comfortable and sure footing, it compromises the armor integrity. Consequently, water and other liquids can enter the armor and affect the user.

The helmet is a ballistic assembly, designed to protect the wearer from projectile and energy weapon impacts, bladed weapons, and blunt trauma. An integrated polarized visor protects the user's eyes from the ordinary battlefield hazards of grit and dust, but also laser blindness and fragments. Helmets also incorporate a combination camera/laser rangefinder unit built into the helmet's right side, just above the ear. Those suits of combat armor surviving in the wasteland still have the housing for that equipment, but no suit has been documented as having working hardware.

Although it is more expensive, this armor gives more protection (+2 DT) and weighs the same as standard combat armor.