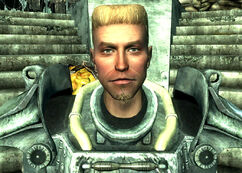 “My Brothers may be gruff, but they will lay down their lives for you.”

Knight Captain Colvin is a Brotherhood of Steel member inside the GNR building plaza in 2277.

A sniper in Lyons' Pride, Colvin is 40, friendly, and warm to everyone; he has priest-like tendencies. To him, combat is like worship, and he treats his rifle as a holy object and his targets as the unfortunate victims of his God's wrath. He says a prayer for the soul of each mutant he kills. He's extremely experienced, and completely unflappable: all according to God's will. He can be found guarding Galaxy News Radio from super mutants.[1]

Colvin is a member of the Lyons' Pride, which he considers his family.

Retrieved from "https://fallout.fandom.com/wiki/Colvin?oldid=3125058"
Community content is available under CC-BY-SA unless otherwise noted.