The Columbia Commonwealth was one of the thirteen commonwealths of the pre-War United States.

Created in 1969, it was comprised of the former states of Maryland and Virginia,[Merchandise 1] as well as the District of Columbia.[1] The commonwealth bordered the Commonwealths, the East Central Commonwealth, and the Southeast Commonwealth.

The Capital Wasteland spans much of the District of Columbia, also known as Washington D.C., as well as portions of both Maryland to the north and Virginia to the south. Several locations here include Washington, D.C., Little Lamplight, Minefield, Rivet City, Canterbury Commons, Arefu, and the Republic of Dave. A chief technician at the RobCo Sales & Service Center wrote about reporting their research findings to higher-ups in Washington.[2] The National Mall of Washington, D.C. also appears in the Atomic Command Pip-Boy game.

Lawless and anarchic for most of its post-War history, the Brotherhood of Steel arrived in the region in 2255, and brought some semblance of order for the few human settlers in the region. Upon establishing themselves in the ruins of the Pentagon, now known as the Citadel, the leader of the Chapter, Elder Lyons, chose to wage war against the super mutants plaguing the region, and funded scientific pursuits such as Project Purity. However this resulted in a quagmire for the Brotherhood, as the war with the super mutants was a stalemate by 2277, and Project Purity had lain abandoned. In addition, half of the original forces had chosen to split and form their own faction, the Brotherhood Outcasts, who hoped to regain contact with the elders in California so as to put Lyons on trial for his betrayal of Brotherhood doctrine.

The situation would grow more severe when the Enclave, having fled to Raven Rock and other locations upon the destruction of their oil rig out west, revealed themselves in full, so as to claim Project Purity for themselves, declaring de-facto war on the Lyons Brotherhood. However, despite the grim outlook, the Brotherhood's use of a pre-War superweapon, Liberty Prime, helped to turn the tide of the war for the Brotherhood's favor, destroying the Enclave headquarters at Raven Rock. Though Liberty Prime would be disabled during the Battle of Rockland, the Brotherhood would still go on to ultimately win the war at the Battle of Adams Air Force Base.

Though successful in their war, and flush with spoils, the Brotherhood would suffer a leadership crisis for the next several years following 2278. Lyons and his daughter and heir Sarah died shortly after another, with a series of 'incompetent' elders taking the helm until Arthur Maxson managed to take control of the Brotherhood following his battle with Shephard, who had been leading the last of the super mutant forces.

Arthur then regained contact with the Brotherhood in California and healed the schism with the Outcasts by rededicating the chapter to the original Brotherhood's manifesto, merging the two. By 2287, the Brotherhood controls most of the Capital Wasteland, distributing free water to settlements and escorting caravans with vertibird air support.

Located just outside of the Capital Wasteland, the area was under the control of the Enclave, serving as a command center following the loss of Raven Rock during the Brotherhood-Enclave War. The Brotherhood would assault Adams Air Force Base, emerging victorious and bringing an end to the war.

By 2287, the Brotherhood has used the base to field a large fleet of vertibirds - some captured from the Enclave, others mass-produced. It was also here that the Brotherhood built the Prydwen.

Although its rural areas were not hit by the bombs, similar destruction is seen here due to the downfall of society and post-War radiation seeping into the region. In the former state of Maryland, several locations can be explored or are mentioned, such as Adams Air Force Base, Baltimore,[3] Camp David,[4][5] Hagerstown,[6] Damascus,[7] Germantown, Olney, Paradise Falls, Rockville, Takoma Park, Wheaton, and the Western Maryland Correctional Facility.

The entire area of the Mire that goes east of the Potomac River is a part of Maryland and the locations in it that can be explored are Braxson's Quality Medical Supplies, Crevasse Dam, Delano grange, Haven Church, Ransacked bunker, Sam Blackwell's bunker, Southern Belle Motel, Scoot's shack, Sunken church, Tanagra Town, and Thunder Mountain power plant.

Frida Madani fled east from Appalachia and ended up along the coast. She mentions that it was "hit a lot harder" than Appalachia and is much worse off as of 2103, even having turned into a ghoul because of the radiation there. Russell Dorsey also hails from Maryland.

A small portion of Maryland is shown in the add-on Point Lookout. Swamplands and deranged swampfolk abominations are numerous, with only a small non-mutated group of tribals. In 2277, Point Lookout was the site of a proxy war between two pre-War survivors, Desmond Lockheart and Professor Calvert.

Parts of northern Virginia are explored as part of the Capital Wasteland, such as Andale, Fairfax, and the ruins of Alexandria. Other known locations include Megaton, Norfolk,[8] Petersburg,[7] Springfield,[9] and the Blue Ridge Parkway.

Lacey Drummond and Isela Mejia hail from Virginia and describe the state as "having more hotspots" compared to Appalachia, and as being "mostly picked clean." However, as of 2103 trade and business are flourishing within the state, with the Blue Ridge Caravan Company delivering to and from settlements along the length of the Blue Ridge Parkway, having supposedly turned it into one of the safest routes in the wastes.[10] Joe Creigh hails from the Virginia coast and traveled from there to Camp McClintock in 2103. Later that year, Russell Dorsey met RobCo technician Greg on the road in Virginia before parting ways and ending up in Appalachia.[11]

The Columbia Commonwealth appears in Fallout 3 and its add-ons Broken Steel, Operation: Anchorage, and Point Lookout, and is mentioned in the add-ons The Pitt and Mothership Zeta. It is also mentioned in Fallout: New Vegas and its add-ons Dead Money and Lonesome Road, Fallout 4 and its add-on Automatron, as well as Fallout 76 and its updates Wastelanders and The Legendary Run.

The Columbia Commonwealth was originally specified in J.E. Sawyer's Fallout Role-Playing Game as one of the thirteen super states. Its extent is portrayed in the image on the right. No extent has been specified in canon games. 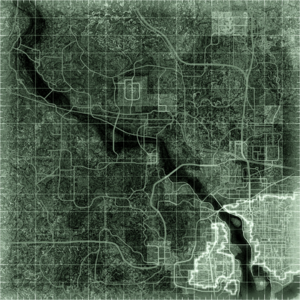 Map of the Capital Wasteland 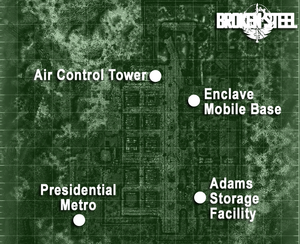 Map of Adams Air Force Base 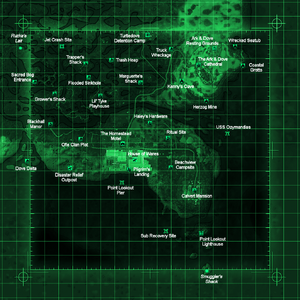 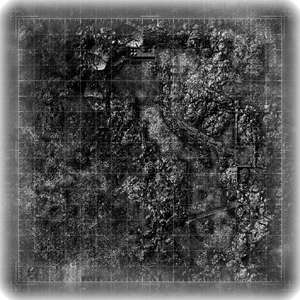 Retrieved from "https://fallout.fandom.com/wiki/Columbia_Commonwealth?oldid=3461657"
Community content is available under CC-BY-SA unless otherwise noted.