Colorado River through the Grand Canyon, seen in the opening slides of Dead Money 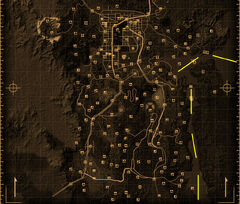 “All territory east of the Colorado River is recognized as Caesar's land, an area indisputably under the control of the Legion and agents acting on Caesar's behalf.”— Fallout: New Vegas loading screens

The Colorado River is a major river running through the states of Arizona, Colorado, Nevada, and Utah. The Hoover Dam was constructed to harness the river's hydroelectric power in the 20th century. The Colorado River forms the dividing line between the New California Republic's offensive camps and Caesar's Legion forts.[1]

There is a path leading down to the river just north of the abandoned BoS bunker. Heading north along the river towards the Hoover Dam will reveal a cove on the east side with lakelurks and two explosives crates with some loot. Heading south on the west side just past the bottleneck of the river, a half-buried duffle bag of loot is hidden in the weeds on the upper bank next to a skeleton. A lakelurk may be nearby to the south. When swimming through the water, tires, boards, and seaweed can be seen resting on the river bottom.

Further south on the east side of the river is the deathclaw promontory. Farther to the south, directly across the river from Blue Paradise Vacation Rentals, is a cove filled with lakelurks. In the cave behind the wrecked boat are a dead mercenary and two duffle bags full of loot. All of this is found before the Courier gains access to the east bank of the river by Caesar's Legion. Pinto beans can be found along the river banks.

The Colorado River appears in Fallout: New Vegas, and is mentioned in its add-ons Dead Money, Honest Hearts, and Lonesome Road,[2][3][4] the Fallout 76 update Wild Appalachia,[5] and the graphic novel All Roads. It is also labeled on a map of the Hoover Dam seen in-game.[6]

Hoover Dam map
Add a photo to this gallery

Retrieved from "https://fallout.fandom.com/wiki/Colorado_River?oldid=3499555"
Community content is available under CC-BY-SA unless otherwise noted.