7h 30m
“We've heard that local Raiders have found a brand-new Mr. Handy, still in his original box, in an abandoned industrial building. We should try to get our hands on this collector's item before those Raiders ruin it.”

Head up to the top floor to confront a raider leader accompanied by two raiders who can be spoken to. All dialogue options lead to a fight. Once they are defeated, the Mr. Handy box is given as a reward. The two rooms to the right contain two pairs of feral ghouls. 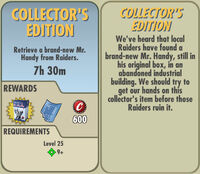