Entrance from the High Road side

The collapsed overpass tunnel entrance is a location in the Divide in 2281.

The collapsed overpass tunnel entrance is the remains of a caved-in freeway tunnel that collapsed when the missiles around Hopeville detonated causing violent earthquakes. Many ruined cars hang from the highway above.

The interior is strewn with miscellaneous items, crates, and derelict vehicles. Proceeding through the tunnel ends in access to the High Road via the High Road entrance. A RALPHIE poster for the Feel Like a Kid Again challenge can be found in the back of an overturned trailer with two caravan crates on the left. It is found by the first corner after entering the tunnel from the entrance. 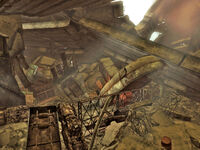 Duck and Cover! in the box with the teddy bear

RALPHIE poster on the nearby warehouse

Ralphie poster in the overturned trailer
Add a photo to this gallery
Retrieved from "https://fallout.fandom.com/wiki/Collapsed_overpass_tunnel_entrance?oldid=3399536"
Community content is available under CC-BY-SA unless otherwise noted.