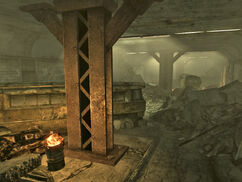 “Head out the back door of GNR and take the collapsed car tunnel to the other side of Dupont. Then take the metro tunnels until you're there. Hey, be careful though... you'll have to find another way back 'cause it's a one-way trip.”— Three Dog

The collapsed car tunnel is part of the underground tunnel system in the Capital Wasteland.

This tunnel contains feral ghouls and the odd raider group.

The collapsed car tunnel appears only in Fallout 3.

Retrieved from "https://fallout.fandom.com/wiki/Collapsed_car_tunnel?oldid=3085103"
Community content is available under CC-BY-SA unless otherwise noted.