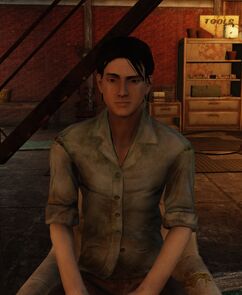 Colin Putnam is a resident of Lewis & Sons Farming Supply in Appalachia, living there with the rest of his family in 2103.

Colin and his family returned to Appalachia in 2103 and made their home at the former farm supply store. The family first secured the barn before later returning to begin restoring the location. Colin's father, George, was a cousin of the store's previous owner Lewis, who had died along side his family during the Great War, and Colin's family claimed the farm supply store as the rightful inheritors. Colin repaired the construction Protectron and Mr. Handy which assist with work at the farm.

Colin was not content with his life on the farm, and he expressed interest in joining the Brotherhood of Steel, believing he could help change the world with access to their technology. If recruited, Colin moves to Fort Atlas and begins training to become a scribe.

Colin Putnam appears only in Fallout 76, introduced in the Steel Dawn update.

Retrieved from "https://fallout.fandom.com/wiki/Colin_Putnam?oldid=3389373"
Community content is available under CC-BY-SA unless otherwise noted.