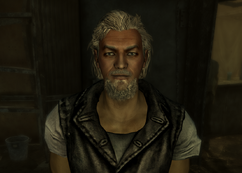 Following in His Footsteps
300 Pieces of Silver

“I own a saloon, kid. Rumors are part and parcel. So I'll give you this one for free...”

Colin Moriarty (born 2227) is a resident of Megaton and the owner of Moriarty's Saloon in 2277.

Colin Moriarty was born in 2227 and has lived in Megaton almost his entire life. According to Herbert Dashwood, he came to the former United States as a child.[1] Once there, his father amassed his wealth using the nearby trade routes, and helped secure Megaton as a trading hub in the area. Colin's father died during a raider attack in 2241 and his son inherited his wealth, including the saloon.[2]

He is a very proactive businessman and a staunch supporter of the "just business" approach to economics; if someone wants something from him, it had better be worth his while.[3] Aside from providing alcohol and prostitutes for the town in exchange for a more than satisfactory amount of bottle caps,[4] and extorting even more caps from whomever he can,[5] he deals in information much more than the aforementioned worldly pleasures: he is very knowledgeable regarding the townspeople of Megaton, and is always keeping tabs on them in case he needs to blackmail them later.[6] He has even done this enough to gain an unsavory reputation: according to Nova, his call girl, "he sells information so much, you'd think the bar was just a hobby."[7]

Moriarty is also adamantly self-assured that Megaton is his town and Sheriff Lucas Simms is only "a facade" and "an illusion of order that [Moriarty] allows to exist."[8] Still, there is some truth to this statement, as Simms is acutely aware that the town needs Moriarty's support and resources to survive.[2] Other townspeople think similarly of him, weary of how many pies he has his fingers in and how deceitful the man is.[9][10][11] His rivals in the saloon business, the Stahls, specifically Andy Stahl, will take the first opportunity to defame his business and his business practices.[12] Regardless of his interactions with the townspeople, he treats his employees even worse, locking up their earning for himself out of paranoia.[13] He treats Gob, the ghoul he bought from slavers fifteen years ago, especially poorly.[14] If slavery was not bad enough, Moriarty even forces Gob to pay for his room and board while also having to reimburse Moriarty for the caps used to buy him.[15]

Due to his outlook on life he believes that the message that Three Dog is promoting on Galaxy News Radio, the "Good Fight", is both crazy and stupid. He furthermore cares little for news about the wasteland,[16] to him Megaton has everything one could possibly need and doesn't see a reason for people to want to leave it.[17]

He spends most of his time in the saloon, but occasionally goes outside to smoke, leaning on the rail out in front of the bar.

Colin Moriarty appears only in Fallout 3.

Watching over "his" town

Retrieved from "https://fallout.fandom.com/wiki/Colin_Moriarty?oldid=3350583"
Community content is available under CC-BY-SA unless otherwise noted.