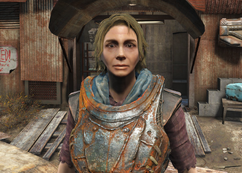 Colette Cooke is a visitor in Diamond City in 2287 and the daughter of Henry Cooke. The player character meets her after completing Diamond City Blues.

She will ask the Sole Survivor to share a drink outside the Dugout Inn which then leads to a speech check and her revealing that she is Henry's daughter. She then interrogates the player character on his whereabouts, followed by the player character's choice of confessing to her that Henry had been killed, lying to her by saying he is alive or doing it while telling the truth when the Diamond City Blues quest is abandoned.

Colette Cooke appears only in Fallout 4.

Jan Johns, who voiced Colette, stated that Colette was one of the hardest roles for her to portray, because she was a much deeper character than most people realized. Because Colette is looking for her father, recording those lines brought Johns back to the time that her father went missing for a two-day period, similar to how she felt about Ellie Perkins missing Nick Valentine. She struggled with the fine line between portraying the character and self-indulgence for an actor.[1]

Retrieved from "https://fallout.fandom.com/wiki/Colette_Cooke?oldid=3408742"
Community content is available under CC-BY-SA unless otherwise noted.