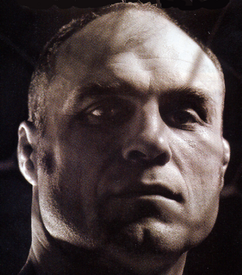 Coleridge is the head of Presper's NCR battalion in 2253.

Presper infected himself, Coleridge, and a handful of loyal soldiers with the New Plague so they would be taken into Tibbets Prison. Once there, the rest of Presper's men, who were not infected, would stage an attack on the prison which would allow everyone to escape. This event would start a countdown for the missile launch onboard Ballistic Orbital Missile Base 001.

ODYSSEUS would assess the viral spread, try to gather up the escaped prisoners, and, once 90% of the prisoners had been retrieved, launch nuclear missiles to "clean & prevent" any further infection.[1]

Coleridge has not appeared nor is he mentioned in any published game. He was to appear only in Van Buren, the canceled Fallout 3 by Black Isle Studios. It is not certain if he will appear in any future Fallout game.

Retrieved from "https://fallout.fandom.com/wiki/Coleridge?oldid=3370524"
Community content is available under CC-BY-SA unless otherwise noted.