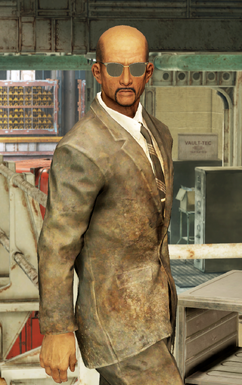 Cole "Slick" Carver is a Secret Service agent in Appalachia in 2103.

Cole operates as the liaison between outsiders and the Secret Service members in Vault 79. Unlike the other members, he prefers to do things diplomatically.[1] In his spare time, he prefers to explore the vault, and surprisingly still finds new things there.[2]

Cole was originally stationed in the vault prior to the Great War and managed to be one of the few agents to survive both Shorty's mutiny and the reactor malfunction. He also helped Mercedes Stern through her pregnancy.[3]

Cole Carver appears only in Fallout 76, introduced in the Wastelanders update.

Retrieved from "https://fallout.fandom.com/wiki/Cole_Carver?oldid=3371641"
Community content is available under CC-BY-SA unless otherwise noted.