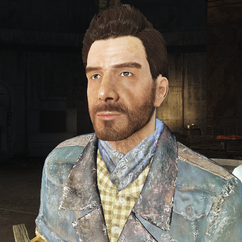 Acadia
Church of the Children of Atom (optional)

Acadia
The Nucleus (optional, as Tektus)

“It might not look like much, but this is the only place I know of where I don't need to hide who I am.”

A recent arrival to Acadia, Cole claims that he would be dead were it not for Chase and DiMA, and is willing to do anything to repay their kindness.[1][2] He will become High Confessor Tektus's replacement if Tektus is killed or convinced to leave the Island.

Cole appears only in the Fallout 4 add-on Far Harbor.

Retrieved from "https://fallout.fandom.com/wiki/Cole_(Far_Harbor)?oldid=3186947"
Community content is available under CC-BY-SA unless otherwise noted.