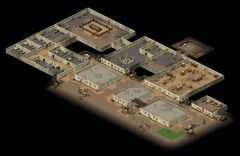 Cold Water is a town built amongst the ruins of the pre-War city of Coldwater, Kansas. Cold Water is mainly famous in the region for its casino and is inhabited by humans, as well as a few ghouls.

Around 2198, Red Stingers, a group of criminals from Quincy led by an individual named Guldo Sciavo, poisoned a group of Brotherhood of Steel paladins and stole their power armor and vehicle, before heading off to Coldwater. Armed with Brotherhood equipment, the Red Stingers easily took control of the town.

During this period of time, the town was inhabited by many citizens and traders, with Guldo's gang being the rulers of it. Among the citizens are Simon Dudley, his sister Adele Dudley, as well as Father Donald, ghouls Jacob and Brad and Rainman. The local criminal and businessman is Don Vinchenzo.

Eventually, a Brotherhood squad led by the Warrior, defeated the bandits and freed the town; retrieving the three stolen power armors from Guldo and his men. While fighting through the town, the Warrior saves Adele Dudley from Jeff Dougal, a member of Guldo's gang, and is asked by Don Vinchenzo to assassinate Ma Baker. However, Ma Baker was in fact a nickname of a Brotherhood paladin, sent into town to find out about raider activity in the region. The three sets of power armor were eventually returned to the Auditor General, who awaited the squad near the insertion point.

The town is called both "Coldwater" and "Cold Water" in various places.

Cold Water is based on the real world location of Coldwater, Kansas.