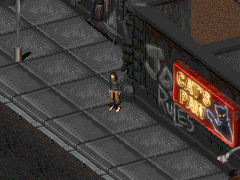 “(The child glares at you sullenly as you approach...you can barely see his face beneath all the dirt. On the remains of his shirt is scribbled "Cody." As you near him, his glare breaks and he smiles slightly.)”

Cody is a New Reno orphan standing in front of the Cat's Paw in 2241.

A ragged-looking orphan wearing a tattered shirt with his name scribbled on it[1], the small boy ekes out an existence in the lawless streets of New Reno. He is covered in dirt and his clothes are almost entirely tattered.

Throughout the game, he does not utter but two phrases (depending on the outcome of dealing with the Enclave), which indicates that his ability to speak may have been somehow affected sometime in his life. He has a keen eye, however, and is aware of everything that happens around him.

Cody appears only in Fallout 2.

Retrieved from "https://fallout.fandom.com/wiki/Cody?oldid=3286605"
Community content is available under CC-BY-SA unless otherwise noted.